Classically we divide our solar system into an inner part, in which the rocky planets Mercury, Venus, Earth and Mars orbit the Sun within the asteroid belt, and an outer part, where we find the gas giants Jupiter and Saturn as well as the ice giants Uranus and Neptune. But this outer region of the solar systems also hosts other types of bodies like the Centaurs and the trans-Neptunian Objects (TNOs). Individual objects of this type are regularly presented here in the Journal for Occultation Astronomy in the series ‘Beyond Jupiter’. In this article I will give a more general view of these bodies of the outer solar system. In 1930 Clyde Tombaugh discovered the first trans-Neptunian object: Pluto. The existence of a planet (‘Planet X’) beyond Neptune was postulated since the discovery of Neptune in 1846, because of apparently remaining irregularities in the orbit of Uranus and Neptune. Percival Lowell started a search programme in 1906, but without success until his death in 1916. The programme was continued in 1929. The young amateur astronomer Clyde Tombaugh was hired for this laborious work at Lowell Observatory. On 1930 February 18, after nearly a year of searching, Tombaugh discovered a moving object on photographic plates taken on January 23 and 29. This new distant object was named Pluto and was declared to be the ninth planet of our solar system. However, soon and in the following decades with subsequent refinements of Pluto’s mass (only 0.002 Earth masses) it became obvious, that Pluto cannot be Lowell's postulated ‘Planet X’, causing and explaining the remaining orbit residuals of Uranus and Neptune. The mystery was solved after a refinement of Neptune’s mass in 1992 with data derived from the Voyager 2 flyby. 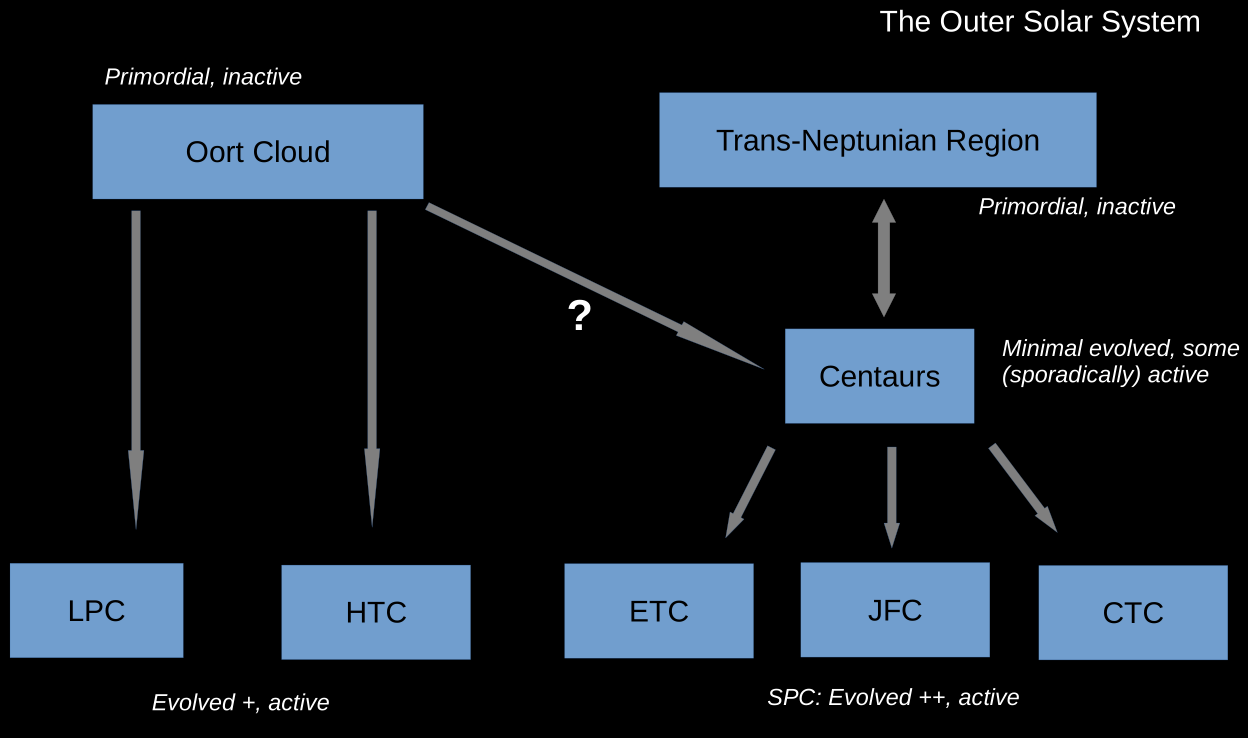 For decades the main figures in the solar system were the planets, the asteroids in the main belt, and the comets. The latter ones gave rise to formulate theories about the outer solar system. Essentially two classes of comets are distinguished: short-period comets SPCs (with orbiting periods P < 200 years) and long-period comets LPCs, with (very) eccentric or even (nearly) parabolic orbits. Short-period comets have usually low-inclination orbits while the orbital inclination of long-period comets is randomly distributed. Furthermore, the mass-loss during one revolution of a short-period comets implies, that they could not have been formed 4.5 billion years before in those regions, where we observe them today, because they would have already lost their volatiles after some 105 years (and vanished), if not disrupted or ejected even before. Short-period comets must have formed somewhere else (where they could preserve their primordial state), and by some mechanism they are transferred into their current orbits. Ernst Öpik in 1932 and Jan Oort in 1950 postulated a spherical cloud of primordial icy planetesimals around the Sun, extending about 20,000 to 50,000 au from the Sun. This cloud can serve as a repository for comets and from time to time individual objects are ejected into the inner solar system. While this could explain the observed population and properties of long-period comets, it is harder to explain the existence and characteristics of the short-period comets consistent with this model (how are they captured into their short-period low-inclination orbits?). Between the 1940s and the 1970s, the existence of objects beyond Neptune (or Pluto) was discussed by F. Leonard (1930), K. Edgeworth (1943, 1949), G. Kuiper (1951), A. Cameron (1962), and F. Whipple (1964, 1972). In the  1970s and 1980s these concepts (Oort cloud and the later so-called Kuiper-Belt1) and the connection to the short-period comets were further investigated and computer-simulated (e.g. [1], [2], [3]) but they were still theories as long as no observational evidence for the existence of such objects could be found. It took some more years before the first dedicated survey searching for these distant objects was initiated. 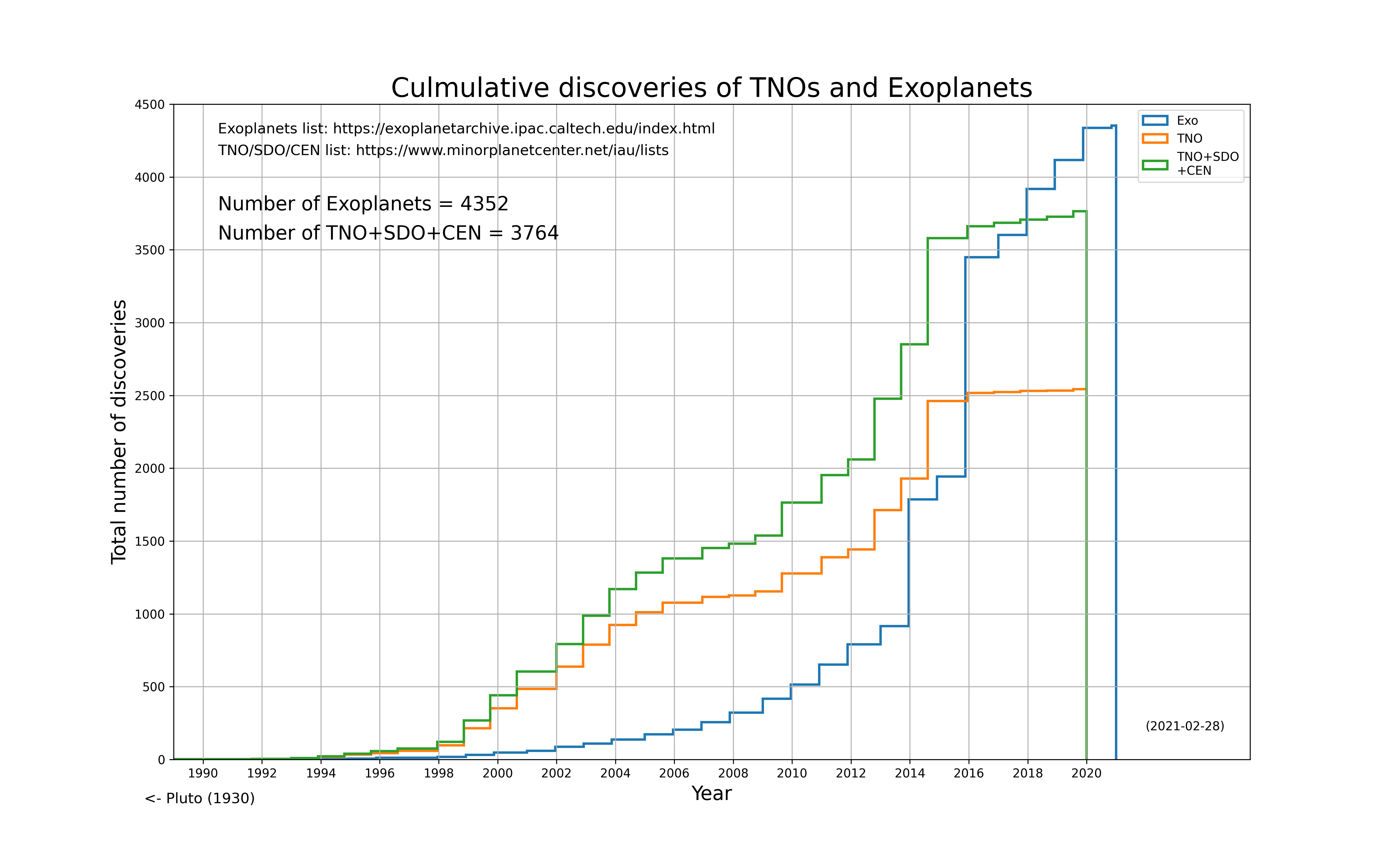 In 1992, after some years of search, the second trans-Neptunian object, 1992 QB1 = (15760) Albion, was discovered by David Jewitt and Jane Luu at Mauna Kea observatory, Hawaii [4]. It was the beginning of the systemically exploration of the Kuiper-Belt, or more generally spoken, of the trans-Neptunian region. In 2006, the IAU introduced dwarf planets as a new category. Since the 1992 QB1 discovery in the early 1990s many trans-Neptunian objects were found, including some of similar size and mass as Pluto. At that 2006 IAU assembly, Pluto lost his status as planet and was categorised as a dwarf planet. Currently, the IAU list five objects in that category: Ceres (in the asteroid main belt) and four TNOs: Pluto, Eris, Makemake and Haumea. The exploration and our knowledge of Centaurs and TNOs have advanced a lot in the past years: recent surveys like CFEPS (Canada-France Ecliptic Plane Survey), OSSOS (Outer Solar System Origin Survey), DES (Dark Energy Survey) etc. have significantly increased the number of TNOs with well-established orbits. Physical properties for a number of objects have been derived by dedicated observational studies (e.g. rotational light curves) and not least also because the number of successfully observed occultations has increased significantly due to better predictions (impact of the Gaia star catalogue), providing physical properties like size and shape, densities, or even leading to the discoveries of rings around Centaurs and TNOs [5], [6].

On the other side, our sample of known Centaurs and TNOs is still relatively small and suffers from observational biases. Thus, our population models are probably not well determined. Meanwhile, we know more exoplanets than distant objects in our own solar system (Figure 2), due to dedicated ground-based projects like HARPS, HATNet , MOA, OGLE, SuperWASP, Trappist, and space-based observatories like CoRoT, Kepler and TESS. Though our sample of objects is still small and biased, it is nevertheless possible to compare dynamical models with observational data [7] and to put conclusions into a larger context, e.g.
as constraints to proposed Neptune migration models. We are at the beginning of a new epoch of research into distant objects. New generations of telescopes and surveys like the Rubin Observatory / LSST (Large Synoptic Survey Telescope), the James Webb Space Telescope (JWST) and the Extremely Large Telescope (ELT) will answer some of the current questions, but will also raise new questions. 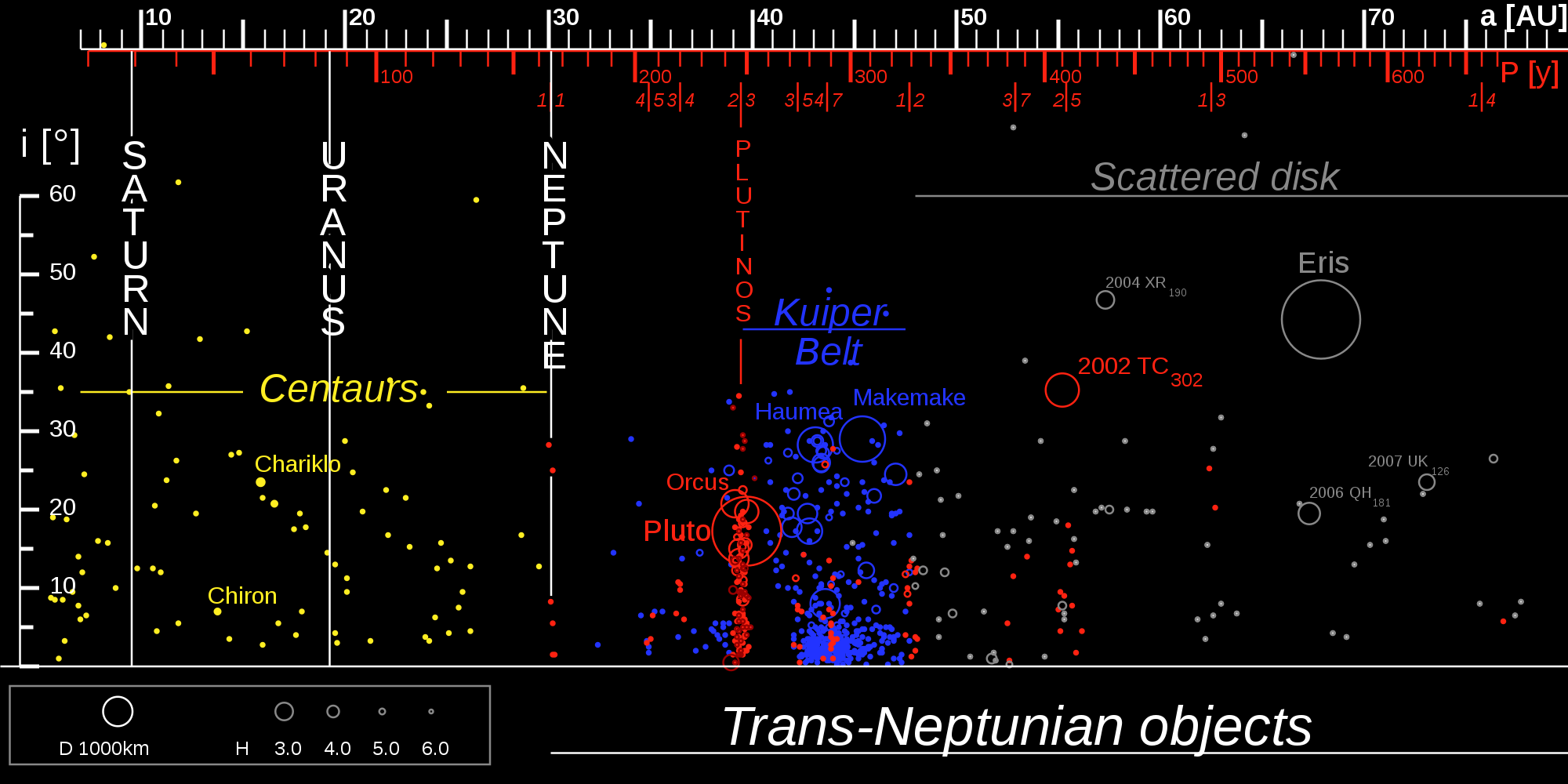 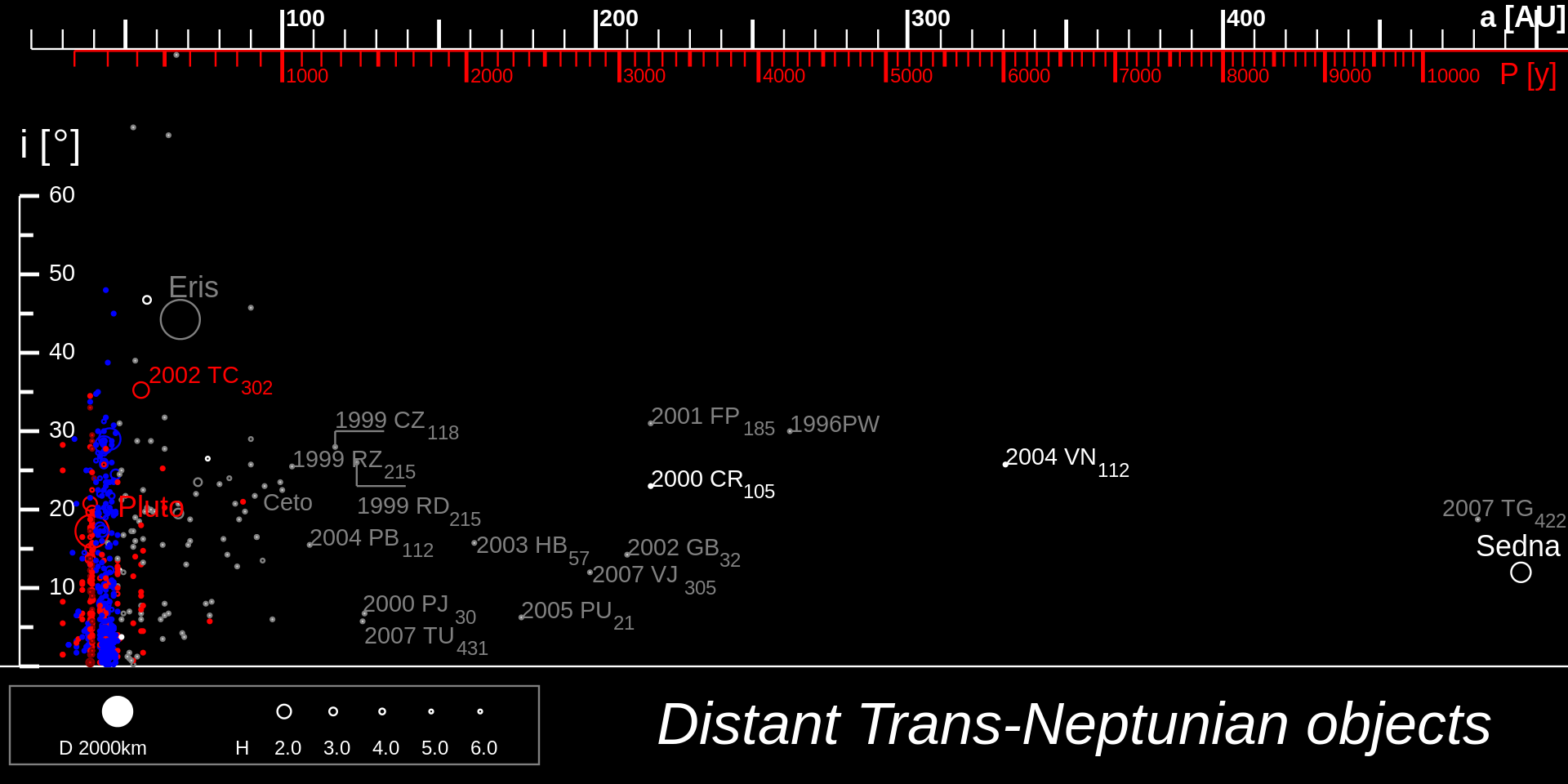